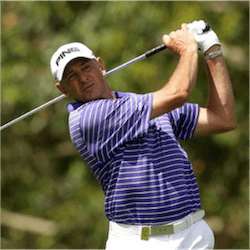 The living legend, Peter Fowler will be representing Australia at the US Senior Open. The five time Senior Tour champ found himself back in the Open after finishing in the top 6 in the 2016 Order of Merit, ensuring him automatic placing.

Fowler has previously finished with an incredible T17 at the 2012 and 2015 Senior Open meaning that he will be providing a strong challenge. So far this year he finished T38 in May in the Senior PGA Championship and hopes are high for his upcoming performances since he will be carrying the flag for Australia by himself.

The Rest Of The Pack

Other notable competitors this year include Fred Couples, Vijay Singh, Bernard Langer and Colin Montgomery. Not competing though is Steve Stricker who could not make the Open due to a scheduling conflict. He has already competed at 6 events in the last 7 weeks. John Daly also withdrew from the Open after a shoulder injury. It will come as no surprise to fans that have seen his 300 yard drives.

The Open is taking place at the Salem Country Club. This will only be the second time that the Open is hosted at this venue.

Currently at the top of the US open rankings are Kirk Triplett, Olin Browne and Doug Garwood.  They are currently sitting with 62, 63 and 64 respectively. The number 5 spot belongs to Paul Goydos who has had a great opening Thursday afternoon.

He was in fine form and it is no surprise as he is one of a handful of players that has shot 59 in the competitions. He secured a 5 under 65, one shot short of matching a course record set by Jay Sigel.

Goydos is a former substitute teacher who became professional golfer and took the Arnold Palmer invitational at age 31 and a few years later also took home the Sony Open. He also won the PGA tour championship an impressive 4 times. He is also a fan favourite thanks to his hang dog expression and self depreciating humour.

This year’s Senior Open has featured many greats in the sport and fans are happy to see them in such good health. Despite the occasional injury here and there, this year’s Open has been very exciting yet stable. With the event in full swing now, fans are looking forward to some great golfing action from the best in the business.