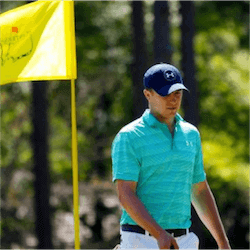 There are lots of PGA tournaments to keep New Zealand’s golf fans entertained throughout the year, but only four majors. Traditionally, the first of these is the Masters, the only one of the majors held at the same venue each year: the Augusta National Golf Club in Georgia, USA.

Dating back to 1934, the Masters has an iconic reputation in golfing history, and many consider it one of the top two tournaments of the year, alongside the British Open. It has made even those who don’t follow golf aware of the unique green jacket awarded to the winner, which has symbolised the Masters since 1949.

This year, whether they follow golf or not, New Zealand online betting enthusiasts will be tempted by the strength of the field alone to take a punt on the Masters, running from 6-9 April. Several golfers ranked in the World Top 10 will take on the Augusta course, so it looks set to be a hard-fought championship.

Some Top Stars Worth a Punt

US golfer Jordan Spieth, currently 6th on the PGA World Rankings, played his first Masters in 2014, and finished tied at runner-up. He repeated that result in 2016, and won the 2015 tournament in between. So he’s definitely a potential winner to consider in the 2017 championship.

But all that is keeping the World No. 2, Ireland’s Rory McIlroy, from a career grand slam is a Masters win, so he too will be playing his heart out to win this year. And Hideki Matsuyama, at World No. 4 the highest-ranked Japanese golfer in history, will be fighting equally hard to become the first Asian ever to win the tournament.

There are two Australians that punters should also consider: 2013 Augusta champion Adam Scott, and World No. 3 Jason Day.

The golfer likely to attract the most betting this year, however, is tournament favourite Dustin Johnson. The American is currently No. 1 on the World Rankings, after three consecutive wins at the Genesis Open, the WGC-Mexico Championship and the WGC-Dell Match Play.

He’s only the seventh player in history to take three PGA championships on the trot, so he is strongly favoured to repeat Tiger Woods’ 2005 victory. That was the last time the World No. 1 managed to win the Masters.