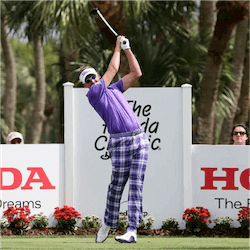 The Honda Classic Is Taking Shape

Defending Honda Classic champion Adam Scott has confirmed he will be returning to the event this year. Scott is currently ranked in the 7th world position and he will be joined in the Open by some of the best players in professional golf today.

Other players that have confirmed their attendance of this year’s Open include Danny Willet who has won the Masters Championship, Padraig Harrington who has won the masters in 2005 and again in 2015 as well as Paul Casey, Zach Johnson and Justin Rose.

A Field of Champions

Adam Scott won last year’s Open by one shot against Sergio Garcia, winning with a total of 9 under par. He went on to win the WGC Cadillac Championship following his Honda Open Victory.

The match had a record breaking 200 000 string crowd watching the events unfold. A Huge point of conversation was the final Bear Trap obstacle that had Scott in a quadruple bogey.

Scott kept his composure for the reaming holes placing pressure on Sergio. Sergio eventually lost his focus on the 16th and 17th holes, securing the victory for Adam Scott.

Excitement is definitely growing at the Palm Beach Gardens resort, the venue for this year’s open. Setting up of the fan features have already started with scaffolding going up this week.

Ken Kennerly, this year’s Executive Director has stated that they will be bringing a lot of new features to the Open that fans can get excited for, other than the fantastic line up of players.

Some of the features he highlighted are the Legends Club. This structure will be erected at the Nicklaus Village behind the 18th hole.

The Club will be a glass structure below the Sky Suite and will be the high-end form of the available hospitality features at the Open. Another big fan draw this year is of course the welcome return of Tiger Woods to the tournament. Woods will be making his 2017 PGA debut at the Farmers Insurance Open.

He was thought to be beginning his year at the Abu Dhabi Championship. Instead his agent stated that he would be playing the Omega Dubai Desert Classic the week after the insurance open.

This year’s Honda Classic looks to set the new standard for the tournament that at the start of the year received renewed commitment from the current sponsor, Honda.