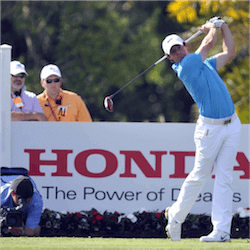 The 45th Honda Classic starts next Thursday on the Champion Course at the USA’s PGA National Golf Club in Palm Beach Gardens. It is becoming an increasingly popular event on the PGA Tour among Florida golf fans, and this year the club will offer the most extensive hospitality options to date.

These include the new US$750-per-day Legends Club at Nicklaus Village, a luxury fine-dining venue featuring a full-length curtain window with a perfect view of the 18th green. New Zealand fans will no doubt be more interested in the Honda Classic field, and the online betting options they offer.

Sadly for those hoping this would be the year Tiger Woods finally won the event, the US star has dropped out again after a return to competition in December, citing the same back injury that has plagued him for the past two years. Ironically, it was at the 2014 Honda Classic that he suffered the original injury.

Northern Ireland’s Rory McIlroy, whose 2012 Honda Classic win by two strokes left Woods as one of the joint runners-up, is also highly unlikely to play this year. He is resting a sore rib.

Despite the absence of all-time great Woods and current World No. 2 McIlroy, the 2017 Honda Classic still has a strong field promising exciting action for punters. Australian Adam Scott, currently at World No. 7, won the event by just one stroke last year, and he will be back to defend his title.

However, the USA’s World No. 8 Justin Thomas, a Palm Beach Gardens local, is in excellent form too. The 23-year-old already has three tournament victories in the 2016-17 season, including two consecutive wins in Hawaii earlier this year.

Defending Masters champion Danny Willett is also in the Honda Classic field, as are fellow Englishmen Tyrell Hatton, Matthew Fitzpatrick and former Honda champion Luke Donald, along with Ireland’s Padraig Harrington, who has won the tournament twice. Any one of them could be a serious contender next week.