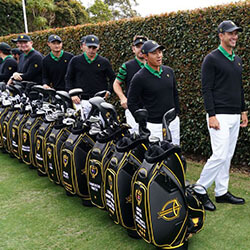 The International team claimed a 4-1 lead against the United States during the opening day fourballs of the Presidents Cup that took place at Royal Melbourne in Australia. Captain of the US side, Tiger Woods, along with Justin Thomas, were able to secure the only point for their side after they beat Marc Leishman and Joaquin Niemann 4&3. Louis Oosthuizen and Abraham Ancer managed to beat US pair Dustin Johnson and Gary Woodland by the same amount of points.

Ernie Else, the captain of the International side, stated that it had been an unbelievable start, and that they haven’t had a start like this for a number of years. He added that it was nice to have some points on the board, and that there had been a lot of tight matches and great golf shots.

The current win that was earned by Woods and Thomas over Niemann and Leishman was the first point on the board but it proved to be the only one that the US team was able to rustle up as the day went on. South African Oosthuizen and Mexican Ancer – making his debut – pushed the score to 1-1 before Adam Scott and An Byeong-hun pushed the Internationals ahead with a 2&1 over Bryson DeChambeau and Tony Finau. Canadian Adam Hadwin and Im Sung-jae then went on to extend the lead thanks to another victory against Patrick Cantley and Xander Schauffele while Patrick Reed lost to Hideki Matsuyama and CT Pan.