Johnson Defends at US Open 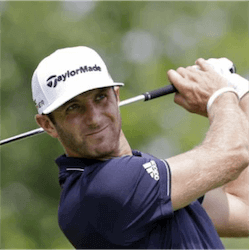 Who Can Topple Dustin Johnson At The US Open Championship?

In the last few months, rather amazingly, it seems that defending US Open Champion Dustin Johnson has in fact improved on his game. The golfer seems to have ironed out any remaining flaws he had after his US open victory last year.

The world number 1 still drives the ball far and straight but what has surprised many fans is how strong his putting and wedge game has become. These two areas have long been seen as the only cracks in the golfer’s armour.

He has definitely been well aware of this and has worked on tightening up his game. He did falter in his last appearance at the Memorial tournament with some poor performance on the green, but this clearly was down to a lack of concentration as his previous performances gave him 8 top ten finishes in 10 events.

Dustin has already taken 3 tournaments this season alone. His strongest competition may come from Rory McElroy. If we look at the statistics however, the world number 2 trails Johnson by a large margin.

McElroy and the rest of the field can only hope that Johnson’s recent injury could flare up on the course. Johnson fell down the stairs of his rental home two months ago, He was injured enough to have to sit out the Masters, but by all accounts it seems he has made a full recovery.

Johnson has also been working on his driving accuracy. In the past the Open was always claimed by not just powerful, but accurate drivers. Johnson seems to be ready for this challenge despite being ranked 166th in accuracy.

The Mental Game For Johnson

If Johnson can maintain his focus during the Open, his powerful driving may be enough to take him to the finish in first place. Without Tiger Woods and Phil Mickelson to put some pressure on him, he just needs to keep his head in the game. He has shown previously that his putting is not necessarily that weak as long as he keeps focussed on the task at hand.

If he forges ahead, he could join the ranks of his heroes Jack Nicklaus and Bobby Jones as the only golfers under 30 who have taken home 5 major titles. With 7700 yards to drive and friendly fairways, this US Open may well turn out to be Johnson’s second.