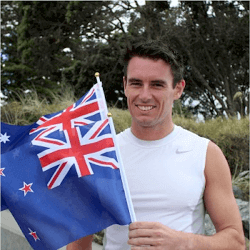 Kiwi Putts His Way into the Record Books

A New Zealander with a passion for golf, and for breaking records, has smashed his way straight into the record books by playing a whopping 237 holes over 12 hours. Brad Luiten has earned a well-deserved spot in the Guinness’s Book of World Records for his impressive golfing stint and perhaps what’s even more amazing is that this isn’t the first time he’s set a record either!

Luiten, a national class runner has also set the Guinness World Record for running on crutches, and its clear that when this Kiwi sets out to do something, he does it properly.

Reaching his goal of 237 holes in 12 hours on Monday evening, Luiten was satisfied that he had putted, smashed and driven his way to meeting his goal, and was now ready to call it a day. He had started his record attempt at 07h40 at the local Helensville Golf Club and was watched by World Record supervisors and a growing crowd of curious onlookers.

By playing 237 holes in 12 hours Luiten shattered the previous Guinness World Record of 221 holes, and had time to complete almost a full second course. The previous golfing record was held by Canadian Scott Holland, who had played 221 holes in Alberta at the Fairmont Banff Springs Golf Course back in 2005.

For a Good Cause

Luiten’s record-breaking attempts were not just in the pursuit of glory, he was inspired to take up the cause in an effort to raise money and awareness for Bowel Cancer NZ. His quest was close to home, as he lost his good friend Stephen Grove to the disease in June 2015. Grove was also an active sportsman and was a prominent football player and coach.

Globally, New Zealand has one of the worlds highest bowel cancer rates and as many as one hundred people die from this disease every month. Bowel Cancer NZ is also only able to retain 2 part time staff due to funding, and Luiten is hoping that he can raise awareness and much needed funding.  In an interview with TV One he said that his record was more about raising awareness and paying tribute to his friend who had succumbed to the disease, than getting his name in the book again.

Luiten now holds 2 world records and his philanthropic activities are earning him plenty of respect within the sporting community. He’s also the fastest man to hop, or run, 10 kilometres on crutches, and when he set this record in 2015 he raised a large sum of money for the Starship Children’s Hospital, another cause that’s close to his heart.