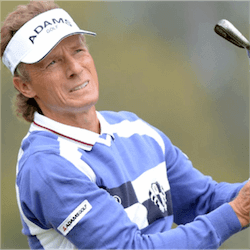 The current Tour money leader, Bernard Langer, has been in the top earners spot for some time now and as with any high profile player, he is getting lot of heat directed at him.

Langer still is fending off accusations that his putting stroke is illegal. Due to his stance, others have criticized him, saying he is “anchoring”, a move deemed illegal by the PGA.

Scott McCarron on the other hand has had a great few weeks, he claimed a win at the Constellation Senior Players Championship after a very impressive double bogey from Langer.

It is hard to pin down how this came about but Langer’s lapse in focus gave McCarron the opening he was looking for. McCarron finished with a 6 under par 66, finishing 18 under 270.

Kenny Perry is still flying high after his great Open performance earlier this month. The formerly retired player returned this year to claim his 4th major win on tour as well as his second US Senior Open. This all despite the fact that last year he retired due to swollen knee problems that put thoughts of rising through the Tour ranks on hold.

Fred Couples is still hanging on in the tour, performing admirably despite chronic back issues that keep flaring up at inopportune moments. Couples has had on again off again back issues for the last 25 years and I guess you can say it has become part of him now. Fans however can see his grimaces in the more taxing parts of the courses.

Brandt Jobe overcame his injuries to become one of the most consistent players on tour. When he was 41 he was busy sweeping out his garage when his broomstick snapped and he received a life changing injury. The broom handle severed his left index finger and the base of his thumb. Thinking quickly Jobe placed his severed appendages on ice and rushed to the ER. Today he lives to tell his tale while being one of the top earners on the Tour.

If you want to be in the money, get your bets in at Sportsbet, an online sportsbook that welcomes Kiwi punters.