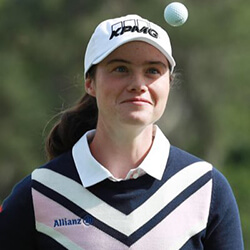 Irish Leona Maguire has carded a record eight under par 64 for her first professional day night event. The Dubai Moonlight Classic is taking place on the Emirates Golf Club that was designed by Nick Faldo, and features massive floodlights to keep the course lit throughout all hours of the night. The 65 players taking part will be playing at least nine holes of one of the opening rounds for the 54 hole tournament that’s being played under state of the art LED lights that are also environmentally friendly.

Maguire managed to sink a 25-foot birdie for the 18th and took the lead by two. Talking about her success on the first day, Maguire said that it felt like night golf suits her, and that she can’t really complain. The world number 237 made nine birdies and one bogey before the night came to an end. Adding to her statement, the 25-year-old player said that she adjusted quickly to playing under floodlights, and that it was better than she had originally though. She continued, saying that the lights when on when they were on 13 and 14, and at first it was a little tricky to get used to.

Germany’s Olivia Cowan is currently two shots behind Maguire after she completed a round of 66 that was also free of bogeys. Nuria Iturrios, the new LET number one, finished the course in third place, while Scottish Carly Booth took fourth.