Lydia Ko Has Another New Caddy 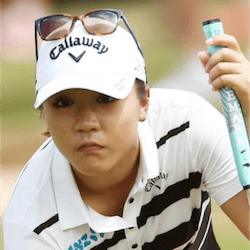 After a slew of caddies under her belt, Lydia Ko, the golf great has found a replacement for her last caddie who lasted only 9 matches.

Her new caddie is Peter Godfrey, with whom she will be taking part in the Volunteers of America Texas Shootout.

The caddie is a quite renowned member of the golfing fraternity. He was voted the 2017 caddie of the year by the LGPA during the Women’s championship, sponsored by HSBC. He previously has caddied for Ha Na Jang.

Godfrey also brings up the rivalry between Ko and Ariya Jutanugarn as he was her former caddie as well. He played with her when she won the Ricoh Women’s Open in 2016. This will be Ko’s tenth caddie, even though she just turned 20 last week.

A Sudden Departure From Ko

Her previous caddie was Gary Matthews he was at her side for 9 events, of which she finished 5 in the top ten.

Matthews had some parting words for Ko after he was let go. He stated that Ko needs to learn a lot about caddie-player relationships. Their last event was the Lotte Championship in Hawaii where Ko finished 2nd, her best performance of the year.

Matthews stated that he was only told he was being fired moments before this last event with Ko. He was told by her agent that Ko needs a change and that Hawaii will be there last match together. Ironically it turned out to be their best game yet. Matthews said that that day their communication was better than it had ever been.

Before Matthews, Ko had Jason Hamilton as her caddie. He remained her caddie for 2 years, the longest stint a caddie has had with Ko.

A Force To Be Reckoned With

It isn’t really strange that Lydia has had so many caddies. She is currently ranked world no 1 in women’s golf with an unbelievably illustrious career, despite her young age. It seems she wants the best available to her.

She won her first major at age 18. The youngest woman to ever do so. She also holds the record for youngest woman to be ranked world no 1 as well as holding the records for lowest final round in woman’s majors. One day before her 17th birthday, time listed her as one of the 100 most influential people in the world.