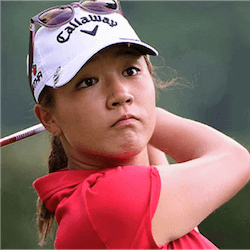 New Zealand’s Lydia Ko managed to just make the cut line at the Woman’s British Open in Scotland, but she needed a helping hand to get there. Bouncing back from a poor opening round, Ko carded a respectable 2-under par 70 to make the cut by a single stroke at 1-under par through the two rounds.

Ko, a former world number 1, jumped a massive 29 places to share 65th place. She got there by clocking two birdies on the back nine, giving her just enough leverage to scrape through. While she might not be playing at her best, Ko has now made 25 cuts out of 26 majors, which includes all five of the British Opens she has played. This one though, was a close call.

For most of the day, it seemed as if Ko would miss the cut. Fortunately for the Kiwi, the cut mark suddenly dropped from 2-under to 1-under as other golfers dropped shots in the not-so-perfect conditions.  Having struggled with putting issues at the Scottish Open, Ko again had a bad opening with the putter. The 20-year-old took 65 puts in total over the first two days, completely negating the good work done by the driver and iron work.

While Ko set a decent bogey-free round, several of her challengers set lower scores and a tough pace on the top of the leader board. Ko finished the second day 10 shots behind Korean Leader In-Kyung Kim who held a two-shot lead over America’s Lexi Thompson and England’s Georga Hall. Kim is playing fantastic golf lately and is a two-time winner on the LPGA tour. She will no doubt face a tough challenge from Thompson who as crept her way up to second in the world rankings.

World number 1, So Yeon Ryu also had a bad opening round and ended up alongside Ko as one-under par. Meanwhile world number 3, Ariya Jutanugarn, completely missed the cut. The third round offered a bit of hope for Ko, but she failed to get going in Kingsbarns. The New Zealand hopeful carded a one over round of 73 mixing three birdies with four bogeys. She is currently even par for the tournament and sharing the 64th spot, a massive 17 shots back from the leader In-Kyung Kim.