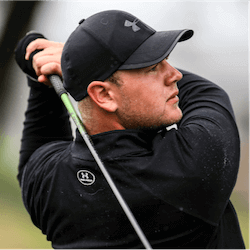 Mark Hutson has set out his intensions, taking an early lead at the New Zealand Men’s Stroke Play Championships. Representing the Muriwai Golf Club, Hutson played through the drizzle and gloomy conditions to card an impressive opening round of seven-under 65. This puts him a full two shots ahead of his nearest rival Nick Coxon representing Riverside Golf Club.

Hutson’s impressive opening round got off to a great start with a birdie on the first hole. He then followed it up with birdies on the 6th, 9th, 11th and 14th hole before slotting home an eagle on the difficult par-5 17th. Hutson was unfazed by the gloomy weather. Coming off the back of a sensational win at the South Island Stroke Play, it seems his confidence is at an all-time high.

After losing the playoffs in 2015, Coxon got championship campaign off to a good start with a birdy on the first hole. He followed it up with five more birdies and a single bogie on the 12th to give him a solid five-under 67 for the first round. Speaking to the press, Coxon said that it was nice to have a good score, which he will try build on going forward.

Reid Hilton, Chris Charlton and Luke Brown are all locked in a three-way tie for third place, a further two shots behind Coxon and four behind Hutson. Tournament favourites Kerry Mountcastle, and Daniel Hillier managed to keep themselves out of trouble carding a 70 and 71 respectively.

In the woman’s event, the leaderboard looks a bit crowded with another three-way tie for first, four players in second and five players all sharing the third spot. Locked at the top of the leader board is Julianna Hung, Amelia Garvey and Subin Wui all sitting at one-under 73. One shot back, four players are sitting on even par including Roze Zheng, the Woman’s Amateur Champion. Behind them, five players are hoping to break free in the upcoming rounds.

Coming off the back of a second-place finish at the Faldo Series, Amelia Garvey had a bit of a difficult start. After five holes, she was sitting at three-over before clawing her way back up the ladder. Determined to do well on home soil Garvey said that she wanted to get the job done this time around after narrowly losing out at last week’s Faldo event.