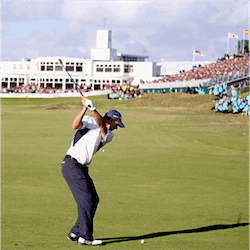 Tasmanian golf hopeful, Ryan McCarthy has snatched an opportunity to attend the 146th Open at Royal Birkdale. The 27 year old player managed to qualify through a playoff match in Scotland. The playoff took place at Gailes Links Golf Course and McCarthy managed to sink an impressive 8 foot putt for a birdie securing his entry into the Open.

The Burnie player is ranked 1342nd in the world, but this did not discourage him from attempting to improve his form. McCarthy is still relatively young and he credits his recent success to his “Swing Doctor”. McCarthy attended a workshop with bio mechanical scientist Robert Neal.

The celebrate scientist has worked with many sports people, with McCarthy the latest in a line of professional and amateur golfers. They worked on McCarthy’s swing in Florida and according to his former trainer, Nick White, his swing is the best it has ever been.

In fact White believes that McCarthy is now on the verge of greatness. If he can keep up his form and consistency, there is no reason why the 146th Open won’t be the tournament where McCarthy really puts his name on the map.

Golf stars from Tasmania are very few and far between, McCarthy will only be the third Tasmanian player ever to compete in the event. The first was Peter TooGood. He played in the 1954 Open, tying for the 7th place.

In 2009, Matthew Goggin tied for the 5th place finish in the Open, making him the current highest finishing Tasmanian player in the history of the event.

A Chance In Prize Money

A quite interesting revelation regarding the Open this week was the fact that the prize money will be given out in US dollars rather than the traditional pounds. It will be the first time in 154 years that the prize money will not be in pounds. Chief Executive, Martin Slumbers has stated that the Dollar is the most widely adopted currency in world golf, and the Open is attempting to keep with the times.

Commentators however believe the reason for the change in currency is thanks to the devaluation of the pound after the Brexit vote. The effects of this was seen last year when Henrik Stenson received less money when converted than the previous year’s winner, with the total prize money in effect being worth $300 000 less than in 2015. Punters keen to get in on te action can do so online at Crownbet, and wager on who they think will walk away with the US cash prize.