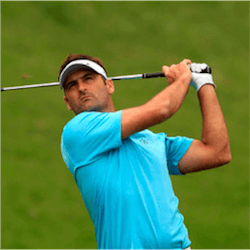 Michael Hendry, much loved Kiwi Golfer has finally qualified for the British Open for the first time, at age 37.

With a very impressive and solid performance, Hendry finished second at the Mizuno Open this past weekend. Hendry joins Chan Kim from the US and South Australian Adam Bland in the top three spots at Mizuno.

Hendry will be heading to the British Open this year, his first major tournament after he won the New Zealand Open in March. He was the first Kiwi to win the Open since 2003, making him a local hero for golfing fans.

Hendry showed constant great performance with a 68 on the first day, 74 on the second day and another 68 on the third and final day, securing his second place position.

A Dream Becoming A Reality

Hendry was quoted as saying that it is great to finally get the monkey off his back. He has missed out on the tournament twice before by 1 shot.

His 10 under par finish was only 5 shots behind Kim Chan who was in top form at the event, leaving the rest of the pack in his dust.

From the Mizuno, Hendry will be flying to Kasama to take part in the JGT Championship. This is before the British Open kicks off in July.

Challenger From The South

From South Australia, Adam Bland will be joining Hendry at the British Open this year. He finished third at the Mizuno. It will be his third British Open appearance. He is joined by fellow Australians, Scott Hendry. Jason Day, Ian Baker-Finch, Adam Scott and Matthew Griffin.

The Top Spot At Mizuno

Of course ahead of the pack on Sunday was celebrated US golfer, Chan Kim. Chan played another qualifying tournament on Monday after the Mizuno Open on Sunday in order to secure his placement in the US open.

His finish at the Open was secured by a 15 under score at the end of the day, making him the clear pack leader of the weekend’s tournament.

Return To The Traditional

The British Open runs between the 20th and 23rd of July and is held at the Royal Birkdale. Fans have praised the return to this incredibly historic venue. The last notable open held here in 2008 featured the incredible win of Padraig Harrison over Sergio Garcia.

The venue is well known for its gusty conditions making each mistake from golfers that much more costly.