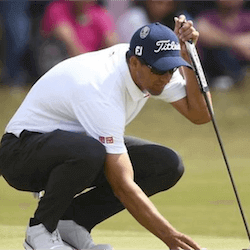 Wednesday saw the captains’ picks announced for the International and US teams contesting the Presidents Cup this year. With 10 golfers in each team already decided by their final rankings after the Dell Technologies Championship last week, the two extra players selected by non-playing captains Nick Price, for the Internationals, and Steve Stricker, for the USA, bring the teams to full strength.

The biennial Presidents Cup pits top US golfers against the pick of the rest of the world, excluding Europe. It’s a team match play event consisting of four days of foursomes, four balls and individual matches, and the USA has won nine of the 11 tournaments since its inauguration in 1994, and they are odds-on at around $0.35 to win again this year. The 2017 tournament will be played at the Liberty National Golf Club in Jersey City from 28 September to 01 October.

Stricker’s first captain’s pick was 40-year-old Californian Charley Hoffman, who was in tenth place among the qualifiers until fellow-Californian Kevin Chappell pipped him in the Dell. Also qualified for the USA Team by virtue of their rankings are Dustin Johnson, Jordan Spieth, Justin Thomas, and Rickie Fowler, respectively ranked World No. 1, 2, 6 and 10, as well as Brooks Koepka, Daniel Berger, Kevin Kisner, Patrick Reed and Matt Kuchar.

Stricker’s other wild card went to Phil Mickelson, yet another Californian, allowing the 47-year-old to maintain his unbroken record of playing in every Presidents Cup to date. His inclusion this year means that since 1994, he’s played in 23 consecutive team events for the USA, and this year could see him surpass Tiger Woods’ all-time match record of 24-15-1 in the Presidents Cup.

Argentinian Emiliano Grillo finished 11th in the rankings among players eligible for the International Team, so he was a natural choice for Nick Price’s first. The 24-year-old joins qualifiers Adam Hadwin from Canada, World No. 3 Hideki Matsuyama from Japan, South Korea’s Kim Si-Woo and Venezuelan Jhonattan Vegas.

There are also three Australians in the International Team: Marc Leishman, Adam Scott and Jason Day, as well as three South Africans: Branden Grace, Charl Schwartzel and Louis Oosthuizen. Price’s second pick was something of a surprise: India’s Anirban Lahiri, who finished up 16th in the International pool rankings after the Dell.