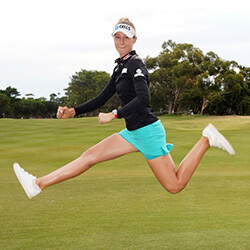 American Nelly Korda has continued the success of her family in Australia after winning the Women’s Australian Open that was held in Adelaide. Korda finished 17 under par, which was two clear of Ko Jin-Young of South Korea. Korda is thedaughter of Czech Petr Korda who won the Australian Open men’s singles title in 1998. Her sister, Jessica, also claimed victory at the Australian Open in 2012, while her brother Sebastian won the tennis junior singles title last year.

The 20 year old took the three shot lead as she moved into he final round played at The Grange, and shot five under 67, winning the event. English Jodi Shadoff finished in tie for eighth place on nine under. Korda’s father won the Australian Open six months after she was born in Melbourne, and the Czech’s only Grand Slam title.

At the beginning of the week she stated that she felt left out whenever her family discussed their Australian titles, and when she claimed her own victory she celebrated with her father’s well-known scissor kick. Talking about her win, Korda stated that she’s finally part of the club, and that the win was really special to her family. She added that there was something in the air there, and that their family loves to go down under, finally saying that she got off the phone with her father, who told her that she was part of the Korda Slam now.