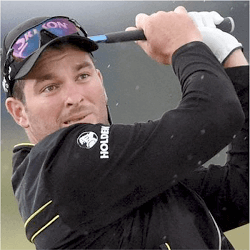 Ryan Fox is a golfer from New Zealand that has managed to do well through two rounds of the Australian PGA. Fox, who plays on the Challenge Tour as well, managed to win the Western Australian Open in 2014 and the Queensland PGA Championship on the Australasia Tour in 2015.

Ryan Fox finished in a tie for fourth place at the Australian Open, and shot a three-under-par round of 69, continuing his excellent form and thus moving to eight-under for the tournament, which he now shares with Adam Scott, the Australian player currently ranked as the seventh best in the world.

The leader of the Australian PGA is Australian Andrew Dodt, who is four shots ahead of Fox and two shots in front of fellow-Australian Ashley Hall, with the latter standing at ten-under-par.

Danny Lee’s very poor back nine saw him slip down the leaderboard, and dashed his hopes of joining Fox at the top.

Lee’s three straight birdies put him at six-under for the Australian PGA and it looked likely that he would finish inside the Top Ten, but his double-bogey, followed by two late dropped shots, meant that Lee carded a one-over 73 to finish at two-under for the competition and in a share of 21st  position.

Mark Brown; Ben Campbell; Michael Long; Josh Geary; and Martin Pettigrew, all New Zealand players, are not likely to make the cut, while Harry Bateman is one shot shy of the projected one-over-par cut line, with four holes left to play.

The Australian PGA Championship golf tournament dates back to 1905 and the winner of the competition will receive the Joe Kirkwood Cup. The trophy is named after Australian Joe Kirkwood Senior, and it has been held in the South East Queensland region since the year 2000.

Since the year 2007, the Official World Golf Rankings have awarded a minimum of 20 points to golfers who manage to win the Australian PGA Championship, with some editions featuring top-ranked players that increased these ranking points to a total of 34 in the year 2011; 32 in 2007; and 26 in both 2008 and 2009. The 2015 edition of the Australian PGA Championship was co-sanctioned by the European Tour, the course measuring 6 746 meters.