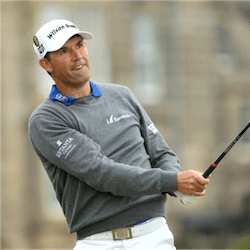 On the 16th of July, the world’s best golfers will gather at the Royal Birkdale for the 146th Open (British Open Championship). Competing for the Claret Jug this year will be two-time Champion Golfer of the year, Padraig Harrington, who will have his sites firmly set on the trophy when he returns to Birkdale. Harrington was briefly reunited with the trophy in Dublin where he recalled fond memories of lifting the Claret Jug in 2008.

Speaking to the press, Harrington said Birkdale brought back a lot of memories for him. He explained about how as a youngster he dreamed of winning The Open. When he held the trophy aloft, it was everything he had wanted and dreamed of. Harington earned his fame after winning his maiden major in 2007 at Carnoustie. He then went on to play through a wrist injury at Birkdale to claim a four-shot victory at the 2008 Open. In doing so, he became the first European player to successfully defend the British Open title since James Braid did it in 1905 and 1906.

Can History be Made?

This year, Harrington is looking for a repeat of his historical success across the Southport links when the Open returns to Royal Birkenhead. The 45-year-old Irishman is currently recovering from neck surgery to treat a trapped nerve. He is aiming to be back in action when he tees off at the BMW PGA Championship at Wentworth. In 2008, Harrington overcame a wrist injury and difficult course conditions to lift the Claret Jug for the second time. The question is, can he do it again?

Royal Birkdale has seen many memorable victories over the years. Who could forget Arnold Palmer’s first Open victory back in 1961 or golfing legend Peter Tomson’s 5th win in 1965. The Birkdale course is one of the few venues that offer spectacular spectator viewing with natural dunes scattered throughout the links. This all combines to create the setting for one of the biggest golfing championships of the year.

Speaking about the upcoming event, Harrington said that every time he tees up for the Open, it is a special occasion. Like many other golfers, he feels that the Open Championship has a heritage, a tradition and an air of excitement that his hard to define. The 146th Open Championship will get underway on the 16th of July and run until the 23rd.