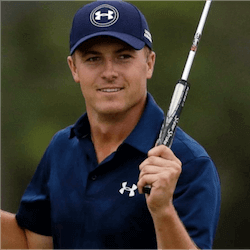 The overcast weather certainly did not dampen the mood as the 146th Open at the Royal Birkdale kicks off. As Justin Rose so eloquently put it, the course has never been played in good weather. The golfers will surely be hoping that the night’s wind gusts of up to 30 mph at times will die down.

With its undulating courses, 123 bunkers and an average of nearly par 7 on each course, the players will need every shred of help they can get here, as Rory McIlroy can attest when he received a pep talk from his caddie. The player had to shoot a one over 71 in order to compete with the pace set by Jordan Spieth, Brooks Koepka and Matt Kuchar.

Making Up For The First 9

McIlroy was 6 shots behind leader, Spieth but sunk a massive 15 foot birdie on the 18th hole to the delight of the crowd who were rallying behind this near legendary golfer. His caddie stepped up before hand when his form was faltering and apparently said: “You are Rory McIlroy, what the F*** are you doing”.

With a very shoddy front nine, McIroy got by on the seat of his pants by hitting 4 birdies over 8 holes to round out his back nine. He stood at 20 to 1 odds at the beginning of the week to which he retorted backing him will be a good bet, most bettors may be a bit too cautious just yet.

What surprised no one was the sterling performance by Jordan Spieth and Justin Thomas. Finishing with a 65, bogey free, confirmed the bookmaker’s suspicions that Spieth is a favourite to take home the Jug this year.

Right on his heels is Thomas who managed a 3 under 67 with three birdies and an eagle. His performance at the US Open was not fantastic but the practice did do him well for the Open.

What did surprise many was Brooks Koepeka. Many people thought the player will be too rusty for the Open but he blew away the competition with a 5 under 65 on an eagle and four birdies.

He could be one to watch, despite his power being his main strength. If he can get his game under control by working on his shots with his irons, he is a definite contender.