Presidents Cup – Can The Internationals Win? 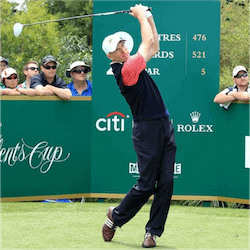 Can the Underdogs Win the Presidents Cup?

The Presidents Cup is just two weeks away and while some may argue that the event has become predictable, even boring, we must not discount the fact that it does offer a smidgen of hope for underdogs. This year, the South African team will feature the big three of Grace, Schwartzel and Oostehuizen. Nick Price will be taking on the role of captain for the third time, squaring up against Steve Sticker at the Liberty National Golf Club in New Jersey.

The event has taken a bit of flack in the press, mainly because of the overall scoreline, which runs in favour of the Americans who have won six consecutive matches since the famous 2003 tie at Francourt Links. What the statistics don’t show is how close each of these victories has actually been. Last time out, South Korea missed out on a win by a single point.

That being said, it is difficult to say that the Americans don’t have the weaponry to take another clean win in 2017. Their line-up includes the likes of Jordan Spieth, Dustin Johnson, Justin Thomas, Rickie Fowler, Matt Kuchar and Brooks Koepka who have all been in excellent form lately.

As for the international competition, things aren’t looking as rosy. Hideki Matsuyama is leading the challenge with Oosthuizen and Australian Marc Leishman running in good form. For everyone else, it has been a tough couple of months. Schwartzel and Grace in particular have been out of sorts and will have to pull something out of the bag to get their game on track.

Rookies Could Make the Difference

Adam Scott and Jason Day, the dynamic Australian duo have also been out of sorts lately but that may not be a deciding factor at the Presidents Cup. Matchplay is very different game where individual brilliance can be cancelled out, especially in foursomes and the betterball. We also have look closely at the so-called lesser players with Kisner, Berger, Hoffman and Chappell bringing something different to the table.

There is also the fact that players like Adam Hadwin, Kim Si-woo and Jhonattan Vegas are completely at home on American soil. If the outsiders are going to be pulling off a shock defeat, it may just be the rookies who play the biggest role in getting them through. If you want to wager on any of the teams you can do so online at Sportsbet, and at present the odds are as follows: