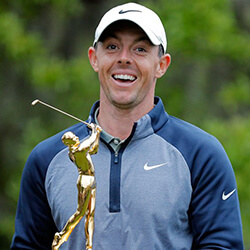 Northern Irishman Rory Mcllroy has won the Players Championship after beating 48-year-old Jim Furyk by a single shot after an otherwise thrilling final that was played at Sawgrass. The Irishman claimed victory thanks to his two under par 70 that saw him take the lead on 16 under.

It’s marked as his first win of the year so far, and has set him up for a chance at the Grand Slam for the upcoming Masters. Talking about his victory, Mcllroy said that he felt like he’s playing some of the best golf of his life at the moment, and that he needs to keep doing the same things. He added that if he had not have won, he would have said that h didn’t need one going into Augusta, but that it was nice to win on a course that will play similarly to Augusta in the next few weeks.

A total of five players have won the modern Grand Slam of Open Championships, US Open, Masters, as well as the US PGA Championship: Tiger Woods, Jack Niclaus, Gary Player, and Ben Hogan. 29-year-old Mcllroy won the US Open in 2011 before winning against a year later and in 2014 at the US PGA, and again at The Open in 2014. Despite this, he is yet to win the Masters, which is his next challenge, and has finished in top six for all of his events so far this year.