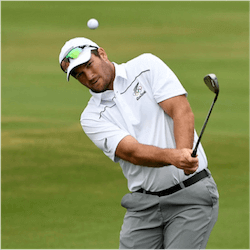 New Zealand pro golfer Ryan Fox recorded his best finish on the European tour earlier this week. The Auckland based professional carded a final round of four-under 67 at the Rolex Series French Open in Paris to finish in sixth place at seven-under par for the tournament. Fox finished just five shots behind Tommy Fleetwood, the English golfer who claimed the top spot.

Fox’s impressive top-10 finish at the French Open comes straight off the back of multiple top 20 finishes this year, giving the kiwi a much-needed bump up the leader board and a handy $400,000 NZD for his efforts. The result sees Fox jump a massive 53 places to put him 49th in the Race to Dubai standing. If he is able to stay inside the top 100 for the reminder of the European Tour season, Fox will automatically retain his European Tour full status.

Speaking to the press, Fox said that he was extremely happy with the result. He said that picked the right weekend to play well and made a massive dent in the order of merit standings. He is pleased with the fact that he will also get a few world ranking points from the achievement as well. For as well as he did, there is one piece of news that Fox did not want to hear.

One Shot to the Open

Unfortunately, the Auckland player missed out on a qualifying spot in the Open Championship by a single shot. If he had managed to achieve just one better, it would have capped off the perfect weekend for Fox. It is not the end of the world though as Fox will have a couple more chances to qualify for the open again when he tees up at the Scottish and Irish Open later this year.

Speaking about his one shot miss from the open, Fox said that all was looking good until Mike Lorenzo-Vera birdied the 18th hole. This was the second time this kind of thing happened with the same scenario taking place in the Australian Open last year.

However, despite not qualifying, Fox will take a massive confidence boost from the tournament. He will look to continue his good performance in the Rolex series with another chance to shine at the upcoming Dubai Duty Free Irish Open. The Irish Open offers a handsome $7,000,000 purse and a chance to earn a start in the Open Championship.