Sergio Garcia Makes A Comeback at the Masters 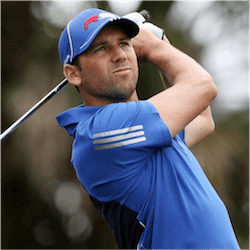 A Late Surge for Sergio Garcia

Sergio Garcia might have come back to form, but the first six holes of the Masters put the Spaniard on the back foot once again. Playing a four-over for the opening six, Sergio seemed to have lost all the momentum he gained in the last four weeks, topping it off with a four-putt on the fifth hole. A brilliant back nine however, put Garcia back in the game with a three-under and a complete showstopper on the 17th to bring the crowd to their feet.

After birdieing the 16th, Garcia arrived on the tee of 17th aiming to continue his improved from. The infamous 123-yard 17th hole had given the 37-year-old his fair share of agony and ecstasy. He would have had sharp memories of hitting two into the water and losing Tiger Woods in 2013. At the same time, Garcia would have fond memories of winning a playoff against Paul Goydos with a perfect back nine in 2008. This year, it was a case of utter joy and celebrations.

After lining up on the Island tee, Garcia struck the ball with the perfect balance of power and aim. After hopping a few times on the green, Garcia’s ball dropped neatly into the hole on the first strike. Once more, Garcia was able raise his arms with a mighty cheer to the crowd. It seemed that this was not the same golfer who just a few weeks before had been cursing the golfing gods.

While he may have ended the day six shots behind leader Will McGirt, Garcia’s smile still never broken. Another golfer who ended the day six behind was Rory McIlroy who posted two-double bogie in just five holes. McIlroy reached the turn on level par, but it was at this point that thing began to unravel. Starting off with a four-putt on the 10th, Rory hit his ball into the water on the 14th to further complicate things. He was able to recover somewhat with birdies on the 12th 17th and 18th to end off with one-over.

McIlroy’s partner, world No1, Dustin Johnson made a startling recovery of his own. After pulling off an eagle on the 16th, he was able to turn a fairly mediocre round into a respectable 71. After thinking he would miss out on the Masters this year, Lee Westwood somehow rose the required three places to gain entry into the competition. The Veteran golfer made the most of his chances posting a 70 without a single bogie.