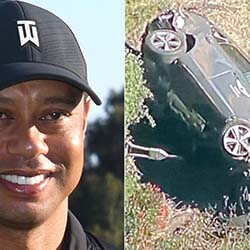 While golfing legend Tiger Woods has spent many a session recovering on the golf course, he now faces what may perhaps be the toughest recovery of his life.

Woods on Monday sustained serious injuries to his lower limbs after crashing his SUV on a rough stretch of road in the coastal suburbs of Los Angeles. Police have in the meantime confirmed that Woods is lucky to have escaped with his life.

The golfer sustained serious injuries to his right leg – requiring the insertion of rods and screws during what surgeons described as a protracted surgical procedure at Harbor-UCLA Medical Center, where he was taken for treatment following the single-car accident.

According to Chief Medical Officer Anish Mahajan, Woods shattered his tibia as well as fibula bones on his right leg, and on multiple locations. The fractures have all been set by a rod inserted into the tibia. Several injuries to Woods’ ankle were apparently also stabilised with the aid of rods and screws.

The crash is but the latest major setback for Woods. The former world champion previously underwent at least four major back surgeries, all of which had kept him from competing for the biggest part of two years.

Police have confirmed that no charges have been filed against Woods, and that there had been no evidence of any sort of impairment. His was the only vehicle involved in the crash.