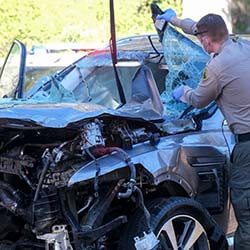 The latest development in the Tiger Woods car crash saga is that the pro-golfer was reportedly driving at nearly double the permissible speed limit before crashing his SUV in Los Angeles on February 23.

Woods was according to sheriff Alex Villanueva driving more than 129km/h before losing control of the wheel of his vehicle. The golfer will reportedly not face any citations over the latest road accident incident – his third collision in eleven years.

Villanueva has in the meantime raised the opinion that Woods’ high-speed driving will have been the primary factor behind the single-vehicle crash. Driving over the speed limit is according to the law enforcement official particularly unsafe given the conditions present on the stretch of road the golfer had been travelling on.

The road is furthermore notorious for drivers driving at high speeds and subsequent collisions and wrecks. So steep is the section of the road that Woods had been driving on, that a runaway truck lane has been made available just beyond the scene of Woods’ collision, Villanueva told a local news broadcaster.

The fact that investigators found no brake marks present on the road is believed to be the result of Woods having mistakenly stepped on the accelerator instead of the brakes in the heat of the moment of panic.

The pro-golfer was apparently wearing a seatbelt at the time of the crash. Neither alcohol nor medication was in any way involved in the incident, law enforcement authorities have confirmed. The possibility of Woods having fallen asleep behind the wheel has not been ruled out.