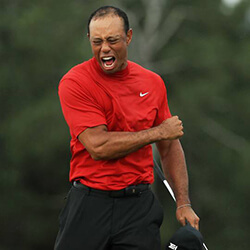 Tiger Woods has claimed his 15th major victory after winning the 2019 Masters at Augusta. The American golfer produced a thrilling fifteenth as he took his fifth Masters title. There were celebrations throughout as Woods finished with two under 70 on the 18th green to win on 13 under, which was one clear of Americans Dustin Johnson, Brooks Koepka and Xander Schauffele.

Woods, who had been previously written off after he fought through many problems in the prior years was seen punching the air in happiness before celebrating with his children near the back of the greens. Talking about his win, the 43 year old said that he was trying to plod his way through all day when he suddenly had the lead. He continued by saying that by the time he came on 18 he was trying to make a five, but when he tapped in he didn’t know what to do, and just screamed.

It’s a full circle for the player, whose dad played in 1997. His latest win also tops an incredible comeback for Woods, who was forced to miss the 2016 and 2017 Masters events due to back issues before undergoing fusion surgery in April of 2017. In 2018, his skill was back on course after he challenged at The Open before coming in sixth place, and came in close behind the champion Koepka for the US PGA Championship, and won the Tour Championship for his 80th PGA Tour title.