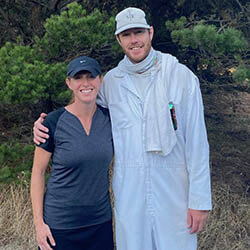 A stunning hole-in-one played by US amateur golfer Allison Koehnke is making sports news headlines for a single reason, and a single reason only: the 95-metre shot was aced by a putter.

Since golfers only ever consider resorting to putters when near on or in immediate visual range of the green, 36-year-old Koehnke would not even have considered trying to play the hole with anything else other than an iron. But since Oregon caddie Graham Banks had noticed some hesitance about the demeanor of his young rookie golfer-for-the-day, he made an impromptu suggestion that Koehnke try using her putter instead – reasoning that keeping the ball slow and low by using her putter, would be preferable to going in fast and hard with one of her irons.

And all the more a good idea since the hole-in-one sunk by the rookie was to be landed on prestigious Oregon golf course Sheep Ranch’s par-3 16th hole – one that just so happens to be located right at the edge of a plummeting coast-side cliff.

Koehnke during an interview with golf’s number one global digest magazine refused to accept all of the credit for the shot, saying that it had been a team effort. Caddie Graham Banks was after all the mastermind behind the genius shot, pointed out a still-stunned Allison Koehnke.

Best of all is that the entire performance was captured on video by Koehnke’s husband Drew. And so, for a welcome change, everyone can be sure that this particular unusual variety of fish was an actual catch of the day!