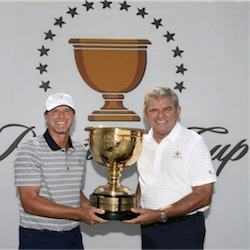 The 2017 Presidents Cup is well under way and if Thursday is anything to go by, the US is cruising to another big victory. The dynamic duo of Justin Tomas and Rickie Fowler dispatched Charl Schwartzel and Hideki Matsuyama 6 and 4 before the day even got started. The Americans went on to win the following two matches before the Internationals finally took one at the Liberty National. The final result after the first session was a massive 3.5 to 1.5 lead for the US.

While it may be early days, a lead drop in the first session is bad news for the International team. We have to remember that the US has never lost at home and to add to this, they have never lost after winning the first session. With their last win coming in 2003, it seems the Internationals have the odds stacked against them. The visitors also don’t have the firepower to take on the likes of Jordan Spieth and Patrick Reed.

Even when they were slightly off their game, the heavyweight American duo dusted Si Woo Kim and Emiliano Grillo to pick up point number 2. Dustin Johnson and Matt Kuchar were also victorious on the day, beating Adam Scott and Jhonattan Vegas despite the fact that they didn’t make a single bogey the entire session.

Grace and Oosthuizen Make a Stand

The only US pair that didn’t win their match was Brooks Koepka and Daniel Berger. They had the misfortune of running into Branden Grace and Louis Oosthuizen, possibly the most powerful duo of the international team. In the previous Presidents Cup, Oosthuizen racked up 4.5 points alone with Grace taking 5. They might just be the team’s only hope to take on the big guns of Spieth and Reed or Thomas and fowler in the four-ball matches.

While there is still a lot of golf to come, it appears the US is on their way to their seventh straight win. Historically, the Internationals have fared better in the four-ball matches but the US has too much firepower and not enough competition to keep them at bay. There is still hope though. A big charge on Friday and Saturday could set up the perfect conditions for an upset on Sunday. If this does happen, it would bring the biennial tournament the spark it needs to keep going for years to come.