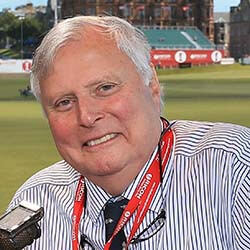 Peter Alliss, legendary commentator and the man who became famously known as the “Voice of Golf”, has died. He was 89.

According to Alliss’ family, who announced his passing via an official BBC statement, his death was unexpected but peaceful. The family did not reveal the cause of death.

Before turning British television golf commentator, Alliss won an incredible 23 tournaments worldwide as a professional golf player. He competed in an impressive 8 Ryder Cups, and was named Europe’s best golfer in 1964 as well as 1966. His first Ryder Cup was played for Britain and Ireland in 1953. He then went on to compete in every Ryder Cup between 1957 and 1969, and represented England a total of 10 times in the World Cup. He was eventually named a golf Hall of Famer in 2012.

Alliss, apart from his impressive career as a player, will be most fondly remembered for his warm and humorous broadcasting style and antics. He made his broadcasting debut with the BBC in 1961 and by 1978 had become the channel’s main and most popular golf broadcaster.

The legendary broadcaster also wrote several books and designed the lay-out of more than 50 golf courses throughout the course of his illustrious career. One of his many famous golf course designs was that of the famous Belfry – which hosted Ryder Cup tournaments in 1985, 1989, 1993, and 2002.

Alliss truly did know the game from the inside out – and back in again. He lived his life by example and was – and is – adored by many.