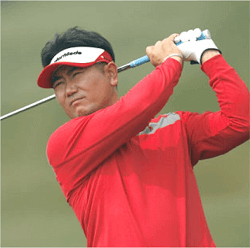 Korean Yang Yong-eun, or Y.E., Yang, the first male golfer born in Asia to win a Major golf tournament, will be playing at the ISPS Handa New Zealand Open taking place in Queenstown during March of 2017.

Y.E. Yang, also known as “The Tiger Killer” thanks to his triumph over Tiger Woods during the US PGA Championship of 2009, will be competing at the New Zealand Open which is set to be played at the Millbrook Resort and The Hills from the 9th of March through to the 12th.

Yang has enjoyed 11 wins during his career as a professional over the past 20 years, and has gone on to amass more than $15 million in prize money around the world thanks to his participation in the PGA; European; Japan Golf; and Asian Tours.

In fact, his being involved in New Zealand’s 98th Open will be bringing his career full circle after Yang Yong-eun Yang first came through to this country for a number of years in order to hone his skills before he turned professional in the year 1996.

Y.E. Yang has stated that he looks forward to returning to New Zealand before heading back to the European Tour in 2017, and that he will be mixing this in with some starts on his PGA Tour. He previously spent his time in New Zealand practicing in places like Auckland, Taupo; Christchurch and other places for around four years about 20 years ago.

New Zealand Will be Well-Represented Too

New Zealand professional golfers Michael Hendry and Ryan Fox have also been confirmed, and both players can be said to be coming off their best year of play.

Fox, at 29 years old, has finally managed to gain his full playing card for the European Golf Tour after managing to finish fourth on the Challenge Tour, and included victory in the Northern Ireland Open on his way to European earnings of almost $300 000.

Hendry, at 37 years of age, has also had an extraordinarily good season on the Japan Tour, and currently sits at 11th place on the rankings, with earnings of over $500 000 thanks to his six Top Ten finishes (including five in a row). Hendry sidestepped the last three events in order to pursue one of the two spots on the Australasian Order of Merit, and his hunt ended up being a successful one.