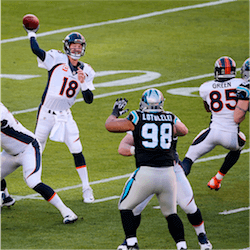 Last weekend, the Houston Texans, Seattle Seahawks, Pittsburgh Steelers and Green Bay Packers all won their Wild-Card Round of the 2016-17 NFL playoffs. In doing so, they put paid to the Super Bowl LI hopes of the Oakland Raiders, Detroit Lions, Miami Dolphins and New York Giants, respectively.

So there are now only eight teams left in contention for the 51st Super Bowl on February 05, and only two weekends of NFL action left to determine who will play in it. New Zealand’s gridiron fans will be keen to get a punt on the big game, but they will also want to put a bet on this coming weekend’s Divisional Round Match-ups, as well as the NFC and AFC Championship games scheduled for Sunday, January 22.

Many bookies and punters are convinced that the Patriots, who finished the regular season 14-2-0, will win the AFC Championship, and go on to take Super Bowl LI as well. It’s a solid bet to make at this stage, although it won’t get you great odds. While we wait for the Super Bowl teams to be finalised, sports betting fans may do better with a punt on some playoffs games scheduled this weekend that could go either way.

Great Weekend of Playoffs Ahead

The Patriots meet Houston in the AFC game on Saturday night, and the New England team are overwhelming favourites to win it. It’s the earlier NFC match-up, between the Seahawks and Atlanta Falcons, which could provide punters with surprising and profitable results. Atlanta’s offence has been phenomenal this season, leading most bookies to favour them in the odds. But if the Seahawks pull off an upset victory, it will be thanks to a defence that has been equally noteworthy over the past year.

On Sunday, January 15, the AFC Divisional game is between the Steelers and the Kansas City Chiefs. The odds are favouring the Steelers, although the Chiefs’ never-say-die grit could throw up a surprise. If the Pittsburgh team do win as expected, they will be serious contenders in the AFC Championship game, even against the mighty Patriots. On their record over the past season alone, the Dallas Cowboys have to be favourites in Sunday’s NFC match-up with the Packers, especially with home-field advantage.