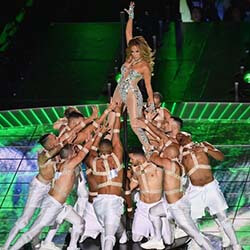 Threatening the tradition of half-time entertainment at this year’s Super Bowl is a call by a prominent artist on the NFL to stop exploiting the mostly Black dancers by not paying them for their contributions.

The fans cheering on the half-time performer at each year’s Super Bowl are in reality volunteer dancers who participate in up to two weeks of rehearsals ahead of the event. According to professional dancer and artist Taja Riley, while the dancers are treated as volunteers, they’re expected to rehearse for up to nine-hours a day.

This year’s volunteers are represented by Bloc, the same agency representing Super Bowl choreographer Fatima Robinson. Riley said she was surprised by Robinson and the decision to recruiting dancers as unpaid volunteers.

Robinson, in turn, has defended the half-time show by saying this year’s 115 dancers will be receiving payment for their services. She added that the only thing required of the half-time “volunteers” is that they be able to simultaneously “walk and chew gum”.

But Riley insists people should be both trained and compensated in full.

According to Sag Aftra and Roc Nation, some sort of an agreement has been reached between the union and the production company since Riley spoke out. Around 100 dancers are reportedly being paid for their contribution to this year’s event. It’s however still not clear whether any payment will be forthcoming to the remaining nearly 300 volunteer dancers who aren’t members of the union in question.

Las Vegas Raiders coach Jon Gruden has resigned. His resignation came as even more emails came to light showing him to have used racist and homophonic expressions and language on ….