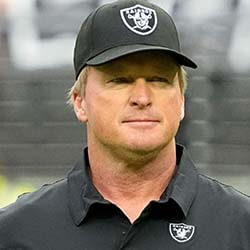 His resignation came as even more emails came to light showing him to have used racist and homophonic expressions and language on several occasions.

In a statement released on Monday, Gruden said he valued and loved the Raiders and wanted to avoid becoming a distraction to the team at any cost – hence the resignation. He also thanked the staff, players, and fans for their support during his time as head coach and added that he had never meant to offend or hurt anybody.

The career-singing emails were all sent during Gruden’s time as ESPN analyst. One such email, which was recently revealed by the New York Times, has Gruden referring to NFL commissioner Roger Goodell as a “faggot” and a stupid football “pussy”. He also at the time claimed that Goodell had been intent on choosing mostly queers when St. Louis coach Jeff Fisher selected Michael Sam for the 2014 NFL draft.

Fisher, who is gay, wasn’t openly so at the time.

In another disastrous email, Gruden reportedly said Eric Reid should be fired for having become one of the first players to kneel in a protest against police brutality during the singing of the national anthem.

Before this week’s emails entered the public domain, Raiders fans remained largely supportive of Gruden, who has coached the team since 2018. Many appear to be of the opinion that people tend to grow and change over the course of a decade.

The team announced on Monday that Rich Bisaccia has been appointed as interim coach.