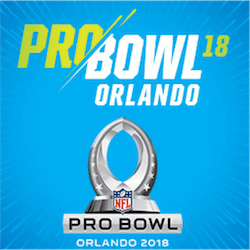 American football is one of the most popular online betting sports with punters all over the world betting on season games. This coming week, the betting heats up as we look forward to the 2018 Pro Bowl. For those not too familiar with the NFL, the Pro Bowl is an All-Star game, which sees the best players from the National Football Conference (NFC) take on the superstars of the American Football Conference (NFC) in a season-ending football extravaganza.

The Origins of the Pro Bowl

The Pro Bowl takes place a week before the Super Bowl as a kind of season-ending homage to the players that have thrilled us throughout the season. It also gives fans one last chance to see their favourite players in action and one more opportunity to bet online. The concept of an All-Star game came about in the 1930’s; however, it wasn’t until the 1950’s that the game started gaining real momentum.

Swapping to the Team-Based Format

In 2013, the Pro Bowl got a shakeup with the removal of conference-specific sides. From 2013 to 2015, the teams were chosen by the coaches, the fans as well as the players themselves. However, after three seasons, the format reverted back to the NFC versus the AFC as fans enjoyed the rivalry more than the random choosing of teams. The game itself has mostly been held at the Aloha Stadium in Hawaii but has since moved to the Camping World Stadium in Orlando Florida.

Since its inception, the Pro Bowl has been won a total of 36 times by the NFC and 28 times by the AFC. While it may look like the odds favour the NFC, we have to consider that last year’s winners were the AFC, beating their rivals by 20 points to 13 at the same venue scheduled for the upcoming game. This year, the 2018 Pro Bowl will take place on the 28th of January at the Camping World Stadium and will be televised live around the globe.