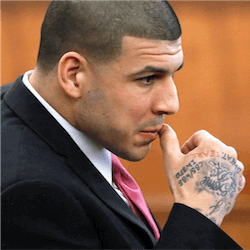 Just weeks after they were celebrating winning the Super Bowl, and on the day they were scheduled to be honoured at the White House, New England Patriots players were in mourning for a former teammate. Disgraced tight end Aaron Hernandez, serving a life sentence without parole in a Massachusetts prison for a murder he committed in 2013, hanged himself with bed sheets in his cell on Wednesday.

Many of Hernandez’ obituaries have lamented the tragic waste of enormous potential he represented. After a brilliant career in high school football, he was considered the top tight end recruit of the year when he started college at the University of Florida in 2007. He proved so successful in college ball, that he skipped his senior year to enter the NFL Draft in 2010, at the age of 20.

When Hernandez started with the Patriots in 2010, he was the youngest player in the NFL, but he proved he was the equal of any rivals, with a slew of records in his first two seasons. In 2012, his five-year contract extension was accompanied by the biggest signing bonus ever paid to an NFL tight end: $12.5-million.

Violent History Dating Back to 2007

Although an asset to all his teams on the field, Hernandez had been getting into violent episodes since 2007, when he assaulted a bouncer during an argument outside a Florida nightclub. He was also investigated, but never charged, for a 2007 drive-by shooting in Gainesville.

In 2014, he was tried for a double drive-by murder in Boston in 2012, but acquitted. At the time of his death, he still had charges pending over another shooting, in Miami in 2015, in which one of his friends lost an eye. After killing another friend, Orin Lloyd, in a 2013 argument, Hernandez was finally convicted and imprisoned. He played his last game for the Patriots in February 2013.

Hernandez’ family has donated his brain to CTE research, which might spell legal trouble for the NFL in years to come. CTE is a degenerative brain disease, chronic traumatic encephalopathy, that has been linked to repeated head trauma.

The disease has now been found in more than 100 former NFL players. If research on Hernandez’ brain establishes that he did have CTE, and a causal link can be proven between the disease and his increasingly violent behaviour, it may be included in evidence used to bring a class-action lawsuit against the NFL.