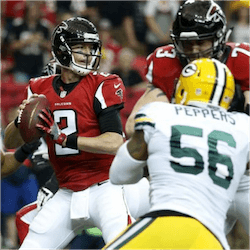 The Atlanta Falcons have exercised some demons and have beaten the Green Bay packers by 34 points to 23 in what was almost a re-enactment of catastrophic lead-dropping Super bowl failure. After building up a huge three-possession lead in the fourth, the Falcons lost control of the game, allowing the Packers to chip away at their lead. When Green Bay scored to bring the game within 11 points, every Falcon fan had flashback nightmares of the tragic Super bowl game where it all ended in misery.

Thankfully, this was not the case this time around. Unlike in the Super Bowl, the Falcons refused to the give the ball back until they had secured the win. On their final possession, the Falcons put together a classic 35-yard drive that chewed up almost five minutes of clock time and essentially ended all hopes of a Packers comeback. The Falcons only handed over the ball with just over a minute left to play. In the end, Atlanta ran the ball six times to finish off the game.

Sunday’s performance by the Atlanta Falcons was a completely turnaround from the sketchy performance we saw in week 1 where they did just enough to defeat the bottom log bears. The team that took on the Packers were the Falcons of old, they did more than enough to re-establish themselves as one of the top NFC teams.

No Comeback This Time Around

Taking an early lead in the game, the Falcons kept adding to their score but it was really their defence that won out in the end. For most of the first half, Atlanta completely overwhelmed the Packers with a huge pass rush and flash defence. The Falcons managed to sack Rodgers three times in the game and rack up seven quarterback hits. The added pressure on Rodgers led to a few bad decisions including a throw that was dropped by Brian Poole.

In the second half, Trufant took a Rodgers fumble and bolted into the end zone to make the score line an appealing 31-7. Unfortunately for Packers fans, there wasn’t a dramatic comeback this time around. Atlanta managed to hold onto their lead and beat the Packers for the third time since their first meeting in October last year. The victory wasn’t all-sweet for the Falcons though. Vic Beasley picked up a hamstring injury in the third quarter and will be out for the foreseeable future. The absence of Beasley could be a serious blow for the Atlanta Defence.