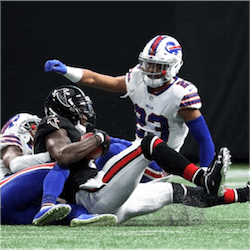 And then there was one… Two NFL teams started Week 4 of the 2017-18 regular season with perfect records, but after beating the Chicago Bears, the Green Bay Packers and the Detroit Lions in their first three games, the Atlanta Falcons ran into a wall of Buffalo Bills on Sunday and lost 23-17.

Kansas City Chiefs’ fans had to wait for Monday Night Football to see if the Missouri team could continue a winning streak that already includes a thrilling upset against the New England Patriots in the season opener, followed by victories against the Philadelphia Eagles and Los Angeles Chargers. At home in Arrowhead Stadium, the Chiefs overpowered the Washington Redskins 29-20 and left the visitors nursing a string of injuries into their bye week.

That makes the Chiefs the only team to go 4-0 this year, and as a result they are top of the AFC West division as well as the AFC ladder. The Falcons are now on 3-1, just like NFC South’s Carolina Panthers, making the Panthers division leaders and dropping the Falcons to wild-card status on the NFC ladder just before their bye week.

The Chiefs now travel to Houston to face the Texans, where the Missouri side are betting favourites to go 5-0.

Other Division Leaders at this Stage

The win in Atlanta put the Bills on 3-1, atop AFC East. They play away again this Sunday; the Bills are underdogs in the betting against the Cincinnati Bengals. The Pittsburgh Steelers took a 26-9 victory over the Baltimore Ravens on Sunday to top AFC North on 3-1. They next play the Jaguars in Jacksonville, with the Steelers odds-on to win. But don’t forget that the Jaguars are AFC South leaders on 2-2, despite their 23-20 loss to the New York Jets this weekend.

In the NFC, the Eagles’ 26-24 win against the Chargers left them atop NFC East, while the Lions beat the Minnesota Vikings 14-7 to lead NFC North. The Los Angeles Rams top NFC West after beating the Dallas Cowboys 35-30, and the Panthers lead NFC South. All four division leaders are on 3-1, and this Sunday, betting sites reckon the closest match among them will be the Rams vs the Seattle Seahawks.

Sunday also sees the Lions play the Panthers, with the Detroit visitors odds-on, and the Eagles are also heavy favourites against the Arizona Cardinals. If you want to bet on these, or any other games, check out the great odds that Sportsbet has to offer Kiwi punters online.