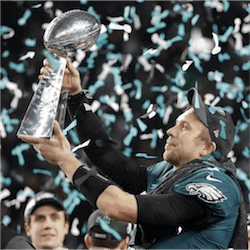 We all knew the Super Bowl LII was going to be a big game; possibly one of the best of the post season. However, no one predicted the sheer brilliance of Philadelphia Eagles quarterback Nick Foles, leading his team to victory on a night where records tumbled.

Fighting off a strong comeback from the Tom Brady-led New England Patriots, the Eagles dug deep and relied on gutsy fourth down plays by coach Doug Pederson and a bit of magic by Foles to secure their first ever Super Bowl Win. As well as leading his side to an unprecedented 41-33 win, Foles became the first NFL player in the history of the sport to throw a touchdown pass and catch a touchdown pass in a Super Bowl.

By the end of the game, there was no doubt who would be receiving the Super Bowl most valuable player (MVP). Foles was able to complete 28 of his 43 attempted passes for a total of 373 yards. This included 3 touchdown passes as well as a 1-yard catch. Taken out of context of the Super Bowl, Foles efforts might not have seemed so significant. However, having actually won the Super Bowl, Foles became the first backup quarterback to win since Tom Brady appeared in the Super Bowl some 16 years ago.

Foles was only called up when the Eagles starting quarterback, Carson Wentz was injured late in the season. Another record he can add to his list of accomplishments is the fact that he became just the 3rd quarterback to win the Super Bowl after starting in fewer than 4 season matches.

As a single game, the Super Bowl LII was an astounding achievement in sporting brilliance. The two sides were exceptional in their passing. Combined, they set a record-breaking 1151 yards. This far outstrips the 929-yard record set by the Washington Redskins and Denver Broncos in the Super Bowl some 30 years ago. It was all down to the quarterbacks who were responsible for a combined 878 passing yards, over 100 yards more than the previous record of 750 set in the Super Bowl LI when the Patriots took on Atlanta.

The Eagles were the first to take the lead and by halftime, they were 22-12 up. Brady and his team mounted a late comeback and the Eagles were 1 point down with just 7 minutes on the clock. The Eagles bounced back though with tight end Zack Erts planting a crucial touchdown and kicker Jack Elliot capping off the win with a field goal.