Eagles Go 6-1 With A Win Over Redskins

Eagles Defeat Redskins and Go 6-1 On the Season 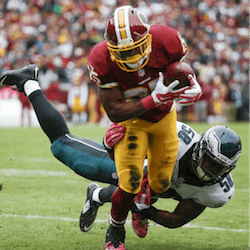 A brilliant performance by Carson Wentz saw the Philadelphia Eagles defeat the Washington Redskins by 34 points to 24. With another win in the bag, the Eagles officially hold the best record in the NFL and go 6-1 on the season. This was also the third consecutive game that Wentz finished with three or more passing touchdowns.

Finishing 17-of-25 for 268 yards and a total of four touchdowns, Wentz had the added pleasure of gaining a career best 63 rushing yards. Zach Ertz led the receivers with 89 receiving yards but it was a combined effort with Agholor, Clement, Hollins and Ertz bringing in a touchdown throw from Wentz.

The game opened with the Redskins pushing the opening drive for a quick field goal. The Eagles were not as fortuitous on their drive as four petalites were given for the offence. Things seemed to get worse for the eagles when Wentz overthrew Torrey Smith straight into the hands of Quinton Dunbar.  A little later in the first, Derek Barnett picked up his first full sack, effectively ending the Redskins drive.

Another Big Game for Wentz

The opening minutes of the second saw kicker Jake Elliot level the scores at 3-all with another 50-yarder. This was his fourth for the season and his 11th successful field goal attempt. Later in the second, Redskins quarterback Kirk Cousins handed off to Chris Thompson for a short touchdown taking the Redskins to a 10-3 lead.

With 5 minutes left in the first half, Eagles wide receiver, Mack Hollins picked up a massive 64-yard pass by Wentz to tie the game. With 30 seconds on the clock, Erz scored a 4-yard touchdown by Wentz, putting the eagles up 17-10. The third quarter saw Wentz producing more magic, manoeuvring through the pocket and finding Clement for another touchdown. The Redskins came back quickly with Cousins finding tight end Jordan Reed for a 5-yarder. The score at this point was 24-17 in favour of the eagles.

The final period saw the eagles start with the ball, giving Wenz his opportunity for a fourth touchdown. He found the eager hand of Agholor to take the score to 34-17. The Eagles Defence held tight but the Redskins eventually found one more touchdown courtesy of Reed. It was a little too late though as the Eagles finished off in another great win. If you missed out on betting on this game at Sportsbet you can still head on over and wager on any of their other markets.