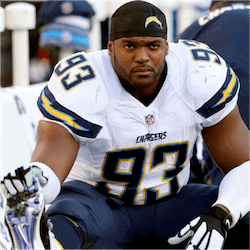 This Super Bowl may be the last for Dwight Freeney of the Atlanta Falcons. The 37-year-old player is the oldest member of the Falcon’s defence.

Dwight has been a professional NFL player for 15 years. He said that at this stage in his career, the Super Bowl is why he plays the game. This was during an interview with USA Today regarding the Falcons’ clashing with the Green Bay Packers on Sunday.

Freeney and the Falcon defence have their focus on trying to contain the Packers Quarterback Aaron Rodgers. Freeney further stated that the older he gets the more he appreciates the feeling of the run up to the Super Bowl.

Freeney has had a decorated career so far. He has a Super Bowl title under the belt, All-Pro honours, and multiple Pro Bowl selections along with a NFL player of the year award.

Many younger players have stated their admiration for Freeney who also brings a keen mind for the game to matches. That said, Freeney is by far not the only elder statesman in this year’s championship game.

Famed Patriots quarterback Tom Brady is 39 this year; The Steelers have 38 year old James Harrison while the packers have 37 year old Julius Peppers.

Fans are surely excited to see some of the NFL’s best players still on their favourite teams. There is also a lot of excitement amongst fans with regards to the list of halftime entertainers at this year’s bowl. At the top of most people’s lists is the first halftime performance of Lady Gaga. She appeared in the 2016 Super Bowl to sing the national anthem but this year will feature her first full set.

The Host President and CEO Sallie Sergeant said that the performers are to be a celebration of the Super Bowl as well as the host city, Houston Texas.

In this regard they have picked a selection of outstanding local performers. These include Hayes Carll, Grupa Fantasma, Los Skarnales, Lecrae, Blue October and Ryan Bingham.

There were some unhappy fans however when it was announced that the Super Bowl ticket lottery will this year require fans to come collect tickets in person as a way to attempt to reduce the number of ticket resellers that has been quite a problem in previous Super Bowls.

Scalpers raise ticket prices to astronomical levels just before the Bowl. Many fans are still upset at the inconvenience presented by the new rules.