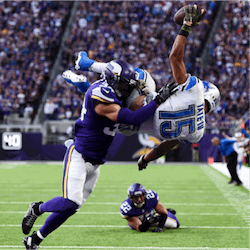 With the NFL getting underway this week, the most anticipated game was Sunday night’s season opener between the Dallas Cowboys and the Giants. While fans turned up in Arlington to support both sides, the main focus was if the league’s two biggest players would actually suit up for the game, namely Odell Beckham Jr and Ezekiel Elliott.

Having received a six-game penalty in 2016 for allegedly beating his former girlfriend, Elliot did make it onto the field after a he got a court injunction. As for Beckham, he was seen running sprints in the pregame warm-up but had to sit the game out because of an ankle injury he picked up a few weeks back. It seems Beckham’s absence had a disastrous effect for the Giant’s. The offence looked slightly flustered and particularly ineffective on the night.

On the other hand, Elliott’s presence had a major influence on the outcome of the game. Alone he was able to rack up an impressive 104 yards on 24 carries, even knifing through the secondary line for another 36 yards on 5 pass receptions. The result was a massive 19-3 win for the Cowboys, solidly ending a 3-game streak for the Giants who had the historical advantage, winning 6 of the last 9 meetings between them.

As predicted, the game was a little disorderly with last year’s N.F.C east Champs (Cowboys) dominating early on. There were some sparks of brilliance for Dallas as quarterback Dak Prescott showed that his impressive rookie season was not a fluke. Prescott was able to complete 24 of 39 passes with a total of 268 yards. To add to this, he proved to be fast on his feet as well. At one point, he dogged tackles by Olivier Vernon and Jason Pierre-Paul.

The Cowboy’s defence, which has been deemed lacking last year and in the 2017 preseason, focused their attention on Eli Manning, swarming him in the passing pocket at each play. Meanwhile the Giant’s offensive was outmatched play for play. This is something the coaches would look at closely considering the Giants chose not to pick up a new lineman for the new season.

After a dismal first half, the Giants did manage to rally a bit with 8 successful passes to bring them within the 5-yard line. But it was not to be, the ineffective offence faltered once more with Charles Topper slicing through for a 9-yard sack. Dallas continued to shut down any drive made by the Giants thereafter, resulting in rather one-sided game and an end result of 19-3 to the Cowboys.