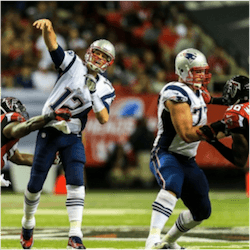 The New England Patriots executed a clinical 23-7 win over the Atlanta Falcons in what was essentially a rematch of the Super Bowl in which Falcons simply fell apart. From what we could see through the dense fog in Foxborough, the Patriots have ironed out any problems they were experiencing earlier in the season. Meanwhile the Falcons were just a shadow of the team that built up a massive 25-point lead in the championship game before it all went wrong.

Tom Brady led the Patriots big comeback, guiding an offensive unit that was dominant from start to finish. This time around, Brady also had a strong defence team to compliment the offence, something that was sorely lacking in previous games. Ranked last in the NFL for over six weeks, the Patriots defence pitched a near shutout against one of the league’s top offence.

Atlanta appeared almost intimated by the New England offence as Brady and his team ripped apart the Falcons with a mixture of big passes and strong runs. Altogether, the Patriots gained 243 yards through the air and a total of 162 on the round. Speaking to the press after the game, Brady it was a great win for his team and a pleasure to hand it off and see his guys rushing the way they did.

The Patriots started well with Brady handing off to Bandin Cooks who used his speed to hot foot it to the end zone. The second touchdown was a simple 2-yarder into the hands of James White who was also responsible for the winning touchdown in the Super Bowl.

Things got a bit desperate for Atlanta; so bad in fact that Matt Bryant, who is usually very reliable, had his field goal blocked and then missed a 36-yarder off the left upright. Meanwhile Stephen Gostkowski seemed to find a way through the fog, sending a 29 yarder, 21 and 38 with precision. By the way he guided the ball, it was almost as if he had x-ray vision through the dense blanket of fog that shrouded the entire stadium.

By the fourth period, it seemed the Falcons were finally ready to end the Patriots domination at 51 successive points. Picking up 1 in start of the fourth, Matt Ryan handed off to Julio Jones in the end zone before receiver, Taylor Gabriel four yards on a fourth-down run. The stadium erupted again as Gostkowski added another field goal to extend the Patriots domination over Atlanta to 54 points.