New NFL Season Around The Corner 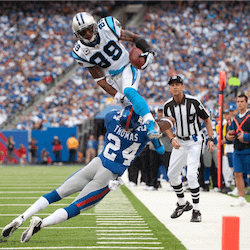 The NFL Season Starts In A Week

The start of the new NFL season is just around the corner, running from the 7th of September until February.

This year the Patriots are still as powerful a force as ever but many other teams are looking to dethrone Brady and Co. Let’s look at the NFC prospects ahead of the season start.

With the Cowboys and Giants still going strong, they will be the teams to beat in this division. The Giants still have veterans who can run circles around newer players and the Cowboys have Smith and Collins who are already playing like vets.

The Cowboys Achilles heel however will be exposed in their first six games when they will be without Ezekiel Elliot, their running back.

With the Packers, Vikings and Lions in one group, fans are sure to get their money’s worth. Matthew Stafford is without a doubt the Lions ace-up-the sleeve. He manages to snatch sure fire losing games from the jaws of defeat. Unfortunately they do not have a strong enough team composition to fully exploit Stafford’s talents.

The Green Bay Packer’s always-on offensive should be more than enough to carry them through this season. Pound for pound the Vikings probably have the most talented team composition with some amazing players in their roster. The side is hoping the addition of Riley Reiff and Mike Remmers will plug the side’s strategic gaps enough.

The Falcons and Buccaneers are the main threats in this division with fantastic records so far. Despite the slump in the Falcons defensive line, their main focus has always been a powerful offense so this may not hinder the team as much as it would any other side.

The Buccaneers are sitting on a treasure trove of talent with James Winston a favourite for MVP and Lavonte Davds, Kwon Alexander and Lavonte David all stepping up their game and delivering for their side.

The Cardinals and Seahawks dominate this division. The Cardinals have amazing potential but Carson Palmer would either need to work on team composition or he needs to build a time machine back to the mid 2000’s. With the completion in the NFL this season, it is not enough to simply be a good enough team.

The Seahawks however have proven last season that they are a serious threat to any side. George Fant is out with an injury but the double edged sword that is Chris Carson and Thomas Rawls more than make up for his absence.

Another fantastic NFL season looks on the cards that should carry over allot of the drama and excitement of last season.

With a range of professional leagues beginning to announce plans to either start or continue their respective seasons, it was just a matter of time before the folks at the ….

As the United States of America continues to see a sharp increase in the number of novel coronavirus COVID-19 infections, and an outbreak starting in the National Football League itself, ….

Kareem Jackson of the Denver Broncos has recently revealed that he’s tested positive for the novel coronavirus COVID-19. He let it be known that he’d been training in Houston, Texas ….

The NFL Wants Colin Kaepernick Back

Roger Goodell, the Commissioner of the National Football League, wants to see Colin Kaepernick the quarterback known for his civil rights activist status, back in a helmet in 2020. He’s ….

The first preseason National Football League game is scheduled to kick off on the 6th of August 2020, with the Dallas Cowboys going up against the Pittsburgh Steelers in the ….