NFL: Learning To Expect The Unexpected

NFL Season Off to Good Start for Kansas City Chiefs 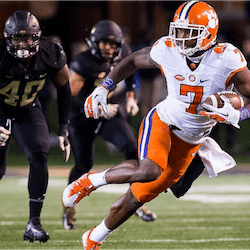 We’re only one quarter of a way into the NFL season and already we’re walking around with a permanent countenance of surprise and a complete shattering of every presumption we ever believed to be true.  The Broncos are back, with the word “contenders” being uttered, albeit in hushed tones as we’re petrified of jinxing the turn of the tide.  Not to mention the New York Giants who have gone from hero to zero on the defence in what seems like mere minutes.  Speaking of defence, for Detroit it has been something akin to having been stuck in a parallel universe with the Giants, as for the first time in a long time there is actually defence to speak of.

All things considered, when we do manage to shake the feeling of being stuck in a NFL twilight zone, we must concede that the biggest surprise of all has been none other than the Kansas City Chiefs – and it’s mostly thanks to Alex Smith.

Smith Vs The Redskins

It was a matter of man against the machine on Monday, and by machine we mean the formidable Redskins.  Alex Smith is a man playing the best football of his life and it certainly showed in the trilogy of magic in the form of a 32-yard sprint towards Travis Kelce during the first half, a 37-yard toss to Albert Wilson and the tying together of numerous critical passes and moves that would have been left hanging had it not been for a Smith-intervention.

Kareem Hunt And Other Revelations

It’s almost impossible to believe now that rookie running back Kareem Hunt had been advised to stay put in school by the NFL drafting powers that be because of his weight.  Hunt had been identified an injury risk and identified as being a player that was likely to get hurt.  Obviously not one to shy away from a challenge, Hunt set to the task of transforming himself as a player, and that’s exactly what he did.

Hunt is a complex player who thrives on the finer intricacies of misdirection and surprise, which of course fits the Chiefs’ playing style like a professionally tailored glove.  On Monday night Hunt became only the fourth player ever to have worked up in excess of 100 yards from scrimmage during his maiden four games.

Hunt turned out to be a golden key to Kansas City being able to uphold its undefeated record on Monday night.