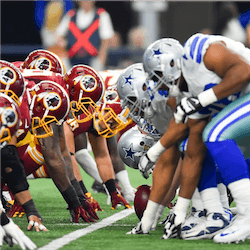 It was a night to forget for the Oakland Raiders. Dropping their first game of the season, the Raiders went down to the Washington Redskins 27 points to 10. While the score may not look too bad, Oakland’s lacklustre performance was an embarrassment for the team and a painful reminder that anything can happen when the right circumstances present themselves. Taking a 14-0 lead into halftime, Oakland struggled to hold back Ryan Kerrigan and the pass rush with Jonathan Allen closing in.

In contrast, Cousins was on hand to rip up the Oakland defence. With great support on all sides, Cousins was only sacked once in the game by Khalil Mack. If we take a look at the stats, it was the third down conversions that really gave the Redskins the game. Washington converted 7 out of their 15 attempts while Oakland went 0 for 11. In total, the Raiders made up 120 yards compared to Washington’s 472.

Oakland needs to put this game firmly behind and look to the future. They have a massive game coming up against Denver in a must-win situation. The only consolation for the Raiders is that the Broncos lost to the Buffalo Bills, evening out the playing field a bit.

Meanwhile the Dallas Cowboys have completely bounced back from their 42-17 thrashing in Denver to beat the Arizona Cardinals by 27 points to 17. Taking the opening kick-off, Arizona made 82 yards in the first eight plays. Palmer was in good form, taking 5 for 5 and handing off a 25-yard touchdown pass, picked up by Jaron Brown. Before the Cowboys had thrown their first down, the Cardinals mounted a huge drive ending in a touchdown that was negated by a holding penalty.

The Cowboys hit back quickly with Prescott scoring a huge 10-yard run with just 3 minutes left in the half.  At the break, it was clear that the first half belonged to Arizona but the scores were deadlocked at 7 apiece. The cardinals had the yard advantage with 152-57 and almost 10 minutes more possession. The game got away from the Cardinals though and the Cowboys pulled away in the fourth quarter. Prescott had a bit game with 13 of 18 for a total of 183 yards, which included a 37-yard pass to Brice Butler with just over 10 minutes on the clock. If you want to bet on any of the upcoming NFL games, head on over to Crownbet, where you can get great odds online.