Raiders Upset Chiefs to Save their Season 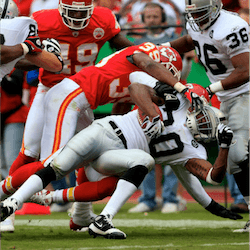 It’s no overstatement to say that the Oakland Raiders saved their season in their upset 31-30 win against the Kansas City Chiefs on Thursday night. Heading into 2017-18 NFL Week 7 on 2-4, having lost even at home to a less-than-impressive Los Angeles Chargers team, the Raiders’ hopes of a playoff were dimming with every game.

Which isn’t to say that Kiwi sports betting fans should be backing the San Francisco side to go to the Super Bowl just yet. Their record in now 3-4; enough to put them ahead of the Chargers on the AFC West ladder, but still behind division leaders the Chiefs and the Denver Broncos, who were still on 3-2 as they geared up for their Week 7 match-up with the Chargers.

The Raiders now lie 12th overall on the AFC ladder, so they’d need to overhaul the Houston Texans, New York Jets, Baltimore Ravens and Jacksonville Jaguars, all at 3-3 before their Week 7 games, as well as the Broncos, before they can even challenge the Buffalo Bills and the Miami Dolphins for Wild Cards in the playoffs. The Bills and the Dolphins finished Week 6 on 3-2, like the Broncos.

The Raiders-Chiefs game may have disappointed Chiefs fans, but it was a thrilling contest for Thursday Night Football punters. Both quarterbacks had outstanding games, and the offense from both teams produced some extraordinary scores.

There was also the drama of Marshawn Lynch getting ejected for shoving an official in the second quarter, and the joy for Raiders fans of discovering that Jalen Richard was a much more effective option. Despite another four quarters of stellar play from Chiefs QB Alex Smith, his opposite number Derek Carr delivered almost 50 passing attempts and marshalled the Raiders to a victory.

And to put the cherry on top in terms of entertainment value, the game featured a last-quarter comeback from the Raiders, who were six points behind, and a final touchdown to win by one point after time had run out.

The loss leaves the Chiefs on 5-2 after starting the season with an imperious 5-0, but although their place at the top of the AFC ladder has wobbled, it’s still intact. They will no doubt come back even stronger for the rest of the season.