The NFL Wants Colin Kaepernick Back 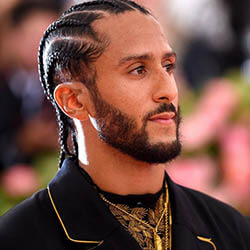 Roger Goodell, the Commissioner of the National Football League, wants to see Colin Kaepernick the quarterback known for his civil rights activist status, back in a helmet in 2020. He’s revealed that he’s encouraging teams to re-sign the 32-years quarterback who hasn’t played since 2016. That was when he had the temerity to kennel during the national anthem to protest against police brutality and race relations in the United States during a game he was playing for the San Francisco 49ers. He became a free agent when the season ended, and no one’s wanted him since.

POTUS Donald Trump advised NFL team owners to fire players who protested in this manner in 2017, but in the wake of the Black Lives Matter campaign Goodell has let it be known that he wants Kaepernick to start playing again. Goodell said that while the final decision was one that only a full team could make, he wants to let it be known that he supports Kaepernick’s re-signing wholeheartedly.

Pete Carroll, Seattle Seahawks coach, said that another team called last week about Kaepernick. Carroll of course brought the previously disgraced players in for a workout in 2017 and had another planned in 2018 but the latter got cancelled.

Goodell set up try outs for Kaepernick in Atlanta in 2019 for all 32 NFL teams to attend but it fell apart at the last moment. This was because of a dearth of media access and what the player’s representatives saw as an out of the ordinary liability waiver.