Christy Wise will captain the US at Invictus Games 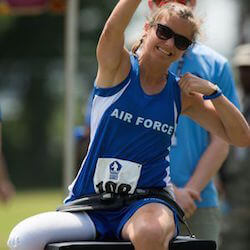 Christy Wise has been named the captain of the US Team for the upcoming Invictus Games. Wise lost her leg in 2015 after being run over by and fishing boat while she was paddleboarding. Established by Prince Harry in 2014, the Invictus Games is a multi-country sporting event modelled after the Wounded Warrior Games in the US. At this year’s Invictus Games, over 550 wounded, ill or injured service men and woman from 17 nations are expected to compete.

The Invictus Games will take place in Toronto Canada on the 23rd of September and run until the 30th. Among the sports included in the games are wheelchair tennis, indoor rowing, archery, wheelchair basketball, athletics, wheelchair golf, powerlifting, wheelchair rugby, swimming, road cycling and sitting volleyball.

The United States department of Defense recently announced the full 90-member team that will be representing the US at the Games. The team will be captained by Christy Wise, who is a Wooster High graduate and a captain in the Air Force. The co-captain for the US team will be Sgt. Ivan Sears from the United States Marine Corps.

An Athlete and an Inspiration

Wise had an above-knee amputation and has since gone on to compete in the 2015 Wounded Warrior Games where she picked up a total of 11 medals including 2 silver medals and 2 bronze medals. Wise also competed in last year’s Invictus Games in the swimming, rowing, cycling and track & field events. She also completed her first triathlon this year.

In 2016, Christy Wise became the first woman and the 5th person in history to be cleared to return to duty for the Air Force following her amputation. She is currently a C-130 rescue pilot and has set up the 501(c)3, One Leg Up On Life Foundation with her sister Jessica. Together they have organised and completed missions to help youths in need of prostheses around the world.

Tony Kutra, the man performing the duties of the under secretary said that the Invictus Games embodies the spirit of every member of the US Armed Forces. The Games inspire them with strength and courage. Kutra said that the US is proud to recognise the athletes at the 2017 games for their achievements and at the same time, recognised every wounded service member achieving results through the Department of Defense adaptive reconditioning program.