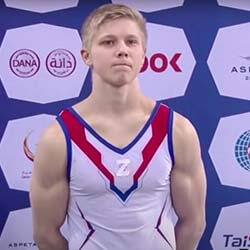 The behaviour of Russian gymnast Ivan Kuliak, who openly wore a symbol in support of his country’s invasion of the Ukraine while on the medal podium at the Apparatus World Cup in Doha, has been described as “shocking” by the gymnastics’ governing body.

Kuliak now faces a ban for wearing a “Z” symbol in support of Russia.

The gymnast reportedly taped the symbol to the front of his outfit after winning bronze in the parallel bars final event. He had been standing next to Ukrainian gold medalist Illia Kovtun for the singing of the national anthems.

The symbol is regarded as offensive as it has been seen embossed on Russian tanks invading the Ukraine. The “Z” has become a symbol of support for Putin and his war on the neighbouring country.

Kuliak now faces disciplinary proceedings by the Gymnastics Ethics Foundation for his conduct. Possible sanctions now faced by the Russian include his being stripped of his bronze medal and a potentially lengthy ban from all international and FIG events.

But Kuliak isn’t the first Russian to have shown public support for Putin and his war with the Ukraine. Former Olympic medalist Svetlana Khorkina last week shared the symbol online, while adding that the post had been for all those not ashamed of being Russian.

Yet another recent ban involves that of former world chess champion Sergey Karjakin, who made several recent comments regarding his brazen backing of Vladimir Putin’s military invasion of the Ukraine.