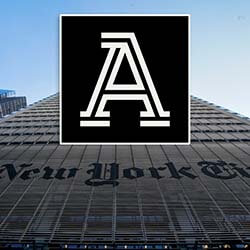 The New York Times has confirmed that it has indeed tabled an offer to acquire the subscription-based online sports site the Athletic. The agreed purchase price has apparently been pegged at $550 million in cash.

The New York Times, which is this year 170 years in existence, is eager to add more digital content to its offering in a push to attract more business.

The Athletic, which was founded in 2016, enjoys the patronage of more than 1.2 million subscribers. It provides news coverage of more than 200 clubs and teams both in the US as well the rest of the world.

Commenting on the deal on Thursday had been New York Times CEO Meredith Kopit Levien. According to Levien, the big-money acquisition positions the New York Times to become a world-wide leader in the world of sports journalism and reporting.

The newspaper is banking on becoming a subscription-first model, which it hopes will help mitigate the steep declines in readership currently experienced. Subscription-first models have become a growing trend in the world of media and newspaper-based advertising. According to a recent report, the New York Times has over the past three years boosted its readership by more than 8 million digital subscribers newly signed on. Levien said the goal is for the Athletic deal to help boost this figure to 10 million subscribers.

The Athletic will continue to operate as a separate business unit. It’s founders, Adam Hansmann and Alex Mather, will be employed by the New York Times following the finalisation of the acquisition.